We are not just a dance school, but quite a team of passionate dancers who love to share their know-how and knowledge with others!
For us it is essential to learn to dance with solid technical bases, while having a pleasant time after a long day of work. That’s why easy swing is looking for teachers passionate about swing, able not only to teach dance but also to share and convey their passion in joy and good humor

This page will help you find the course that suits you best! 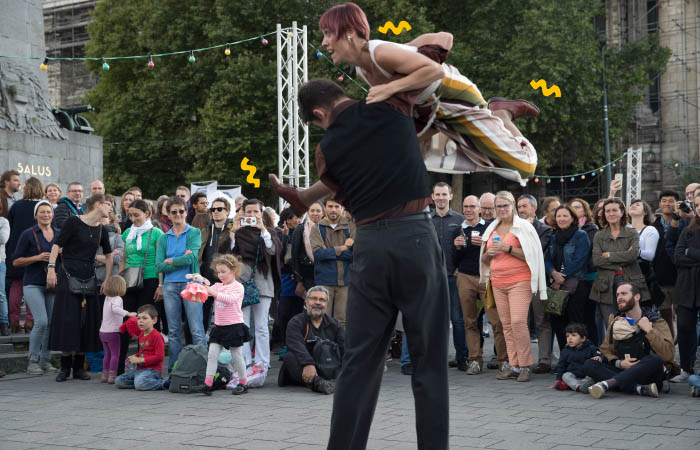 This guide will help you choose the right level for you!

In your own interest and that of the other students in progress, we ask you to realistically choose your level, without overestimating your skills. Thus, all students will be able to work in optimal conditions.

If you have not attended the courses in an assiduous manner, we strongly advise you to resume the last session to which you were enrolled. It is better to get back comfortably in the bath, rather than aiming too high…
Teachers reserve the right to re-evaluate your level at the beginning of the season and ask you to change level if they feel that another level would be more appropriate for you.

*Everybody Leads Everybody Follows

Lindy Hop lessons for beginners, or for all those wanting to review their basics and integrate a course with a new philosophy of dance couples.

This queer friendly class is taught ELEF style (*Everybody Leads Everybody Follows) for the first Time in Brussels!
You don’t need a partner, everyone during the classes will learn the two Lindy Hop roles (Leader and Follower) Much more fun in one lesson!

You’ve never danced lindy hop. You’ve followed one or several initiation workshops. This level is for you, welcome!

You have just completed 1 semester of classes or an intensive workshop at easy swing. You don’t feel comfortable with the basics and want to work on them deeper.

You have diligently followed one semester or 1 year of classes. You have been dancing since longer without really following classes constantly. You don’t feel comfortable with the basics.

You have followed classes for 2 years assiduously and practice social dancing in the evenings.

You have diligently followed 3 years of classes and feel comfortable on various tempos (slow-medium-fast). You regularly social dance in the evenings.

Upon audition : You have followed at least 4 years of full course and are a regular at international festivals. You have an excellent knowledge of the different techniques of guidance and improvisation and work of musicality it’s easy for you.

Course open to all who wish to dance solo. Whether you are a beginner or already initiated, this fun course will definitely be to your liking.

you have followed 1-2 years of charleston / jazz roots classes on a regular basis and you are comfortable in dancing solo. You want to be more challenged!

You have followed 2 years of charleston / jazz roots regularly, you are comfortable in solo dance and are able to easily work several routines. You want to improve your technique and improve your personality Charleston.

Do you follow Lindy hop classes for a year or more and want to go deeper into the 6 counts?

This is the module for you, new movements and new style to improve your dance and have more fun on ballroom!

Do you follow Lindy hop classes for a year or more and want to refresh your Swing Out and your Lindy Circle?

It’s time to go further, Swing Out, Lindy Circle and variations! This is the Real Lindy Hop!

Do you follow Lindy hop classes for a year or more and want to go deeper in your Couple Charleston?

Perfect! In this module you will learn the authentic 20’s Charleston , come and have fun!

You have never danced Lindy Hop. You have already attended one or more « first steps » classes ; That’s your level, welcome !

Learn to dance on a 6-beat tempo in an easy and funny way.
From simple steps (basic 6-beat step, rotations and others) to slightly more complicated ones (send-out, tuck turn, come around). After four weeks you will be able to move elegantly on the dancefloor.

You have never danced Lindy Hop. You have already attended one or more « first steps » classes ; That’s your level, welcome !
Learn to dance on a 8-beat tempo in an easy and funny way.

The 8-beat tempo is the classic Lindy Hop rhythm, allowing you to always dance to the music, and to rediscover the old-school classics (s/he goes, promenade) up to the most essential Lindy Hop step…the swing out !

Learn to dance partner charleston in an easy and funny way.

You will find yourself thrown back to Chicago in the 1930s. Frantic and joyful rhythms will accompany you while learning the fundamentals of 1920s Charleston: famous steps such as Skip Up, Airplane, Hand to Hand just to name a few.

Come out and learn the Shim Sham, the classic Jazz routine known and loved by swing dancers all over the globe. There is no clear answer on who created the swing version of this ‘age old’ tap routine, but Ale will be teaching the version crafted by none other than Frankie Manning himself.

Join us for our first ever Lindy Chorus workshop with Alexandros Marinis.

The Lindy Chorus was created in the 1990s by Lindy Hop great; Frankie Manning. This routine uses partnered and solo Lindy and Charleston moves, most of which are 100% socially lead-able. This routine is ideal for performances and demonstrations.

Lindy Hop and Jazz music, two stories related to each other.

It’s impossible to understand 100% of Lindy Hop, without knowing the history of music that accompanies it for a century! From Congo Square in New Orleans to the 50s, come and discover this fantastic musical journey with Sax!

Come and learn the fantastic story of Lindy Hop!

Early Influence, Swing Era, Aerials Era, Revival Era… Shorty George, All Mins, Leon James and Frankie Manning! From its origins to the present day, Sax will accompany you on a historical journey through the roots of the dance we love!

How can I improvise on music?

How can I interpret a song I do not know?

To these and other questions we will try to give an answer, in this interactive conference (listen and dance) with Sax!

As we humans move along in the concept of time, eras and lives – we tend to romanticize past decades by literature, movies and modern interpretations of past clothes and trends. The period between 1920-1930 is perfect example of this. We see it as a period of glam, parties, sequins and champagne. This was, of course, only a fragment of people ‘s life – but nevertheless a picture we like to talk about. Here’s the fashionable life of the 1920s!

The Stew is a vintage warm-up choreography used by Whitey’s Lindy Hoppers to warm up before practicing their routines and shows.

This routine is often called the Mama’s Stew routine as Mama Lu & The Parkets very famously performed it together.

One of the very first routines, First Stops, developed out of the musical inventiveness of Frankie Manning.

In 1937 as Jimmie Lunceford began playing “Posin'” Frankie’s confidence and intuitive understanding of the music allowed him to freeze in place during the breaks in the music. This inspired Frankie to try these “stops” to other songs where the music didn’t stop.

This is a routine that was used by the Savoy dancers and can be seen both in competition footage from the 30s, performed by Al&Leon in the 60s, Mama Lou Parks dancers in the 80s and also in footage from the Whitey’s

Lindy Hoppers reunion 1983.
As such a significant piece of Lindy Hop history it is an important routine for any dancer to learn.

This routine was a part of many dancers repertoire and is an important part of the Lindy Hop history.

Let´s learn it and help us show our appreciation to the roots of this dance by a little search by your self.

Sugar Sullivan and Barbara Ann Billups, original Harlem dancers and great teachers have worked hard and long to teach these steps to the younger generations.